The tech repair industry had three big stories rattle its core over the last week. The biggest should come as no surprise, while the other two stories may go unnoticed by many. Either way these three stories will help shape the industry permanently going forward.

The first story should surprise no one as Apple has gone to a place that everyone should have seen coming. The serialization of their repair parts continues with the iPhone 13 rollout this week. Multiple sources have now confirmed that if you replace the iPhone 13 screen then the face id feature will no longer work. In a nutshell, this means you need to go to Apple or an Apple authorized repair location to make the part work with the phone. This is one step closer to Apple simply just disabling any and all parts that someone outside of Apple’s network tries to install during the repair process.

While the right to repair movement enjoyed a recent win the biggest tech giant in the world moved forward with making independent repair much more difficult. As I have mentioned before a right to repair law is years away at best, that’s just the way law making works. I wish it were different and I wish we could have right to repair on the books today. But we don’t. The industry needs to come to terms with it and find ways in which we can all succeed now.

One last word on right to repair, the law as it is designed now is too broad. I’ll address this in a future blog post, but it’s why I think Apple will once again be successful in defeating any attempts at legislation as we move into the new year.

Name Change at the Industries Biggest House of Repair

The second biggest industry story this past week might have slipped by you as not a big deal, but it’s huge. The country’s biggest franchise in the industry is changing its name as uBreakiFix (UBIF) parent company Asurion announced this past week they would rebrand all of their more than 650 locations from UBIF to Asurion Tech Repair & Solutions.

Sound negligible to you, right? It’s not. (WARNING: Feeling’s alert) The tech repair industry (a recent term) has long suffered from some really bad names. It started with cute medical references like; doctor, clinic, hospital, etc. (my first shops used clinic in the name BTW) and then morphed into cutsie names that incorporated; break, fix, smashed, phix, etc. At the same time many shops wanted to add Apple branding to their name with a simple “i” or they boldly added “iPhone” – which often brought nasty letters and legal action from Apple.

The worst mistake most shops made seemed innocent at first and in many ways helped bring in business and raise SEO scores. This is one I used early on too but changed when we rebranded my shops a few years later. That mistake is using the term “Cell Phone Repair” to describe your business. Sure, if that’s all you want to be go for it. But its going to limit your future and the future is now.

The name change at UBIF is brilliant on many levels and will allow them to achieve greater success in the long run. Don’t be surprised to see the CPR (Cell Phone Repair) franchise do the same in the coming year. I love the people over there but that’s a name I never really thought would last very long. You know what through, you guys do you! It’s all good.

Why a Big Announcement in the Automobile Industry Matters

Just this week Ford Motor Company made a huge announcement that they will be making their biggest single manufacturing investment EVER to build electric vehicle factories in the US. An investment of $11.4 billion to build two enormous manufacturing campuses for electric vehicles (EVs), creating more than 10,000 new jobs. You might be saying that’s fabulous. I’m all for creating new jobs – especially in US manufacturing – and I love to see US industry modernizing what it produces but what the heck does it have to do with tech repair???!!!

You might have seen this story and skimmed over it, but I doubt if most of your perked up like I did when I read the last line of this major announcement from Ford. It reads, “Ford also announced it is investing a total of $525 million across the United States over the next five years to train electric vehicle REPAIR TECHNICIANS.” In other words, TECH REPAIR PEOPLE like you!

Please hear me out and follow my logic on this opportunity.

Electric vehicles (EVs) are much, much different than the gas turbine mechanical vehicles in our current world. Repairing EVs takes a much different skillset than that of the current auto mechanic. Ford just said that in not so many words. I remember the first time I sat in a Tesla I said to myself, “Wow, this a really big iPad”. I had also recently repaired my electric lawn mower and I was frustrated how different it was from the gas-powered ones that I had worked on with my dad growing up. Then the wheels in my brain started to turn and I said to myself, “wait a minute…”

THIS IS PART OF THE FUTURE OF TECH REPAIR!

Stay with me for a minute or two. In the last couple of years, I had discovered that there was a major need for people in the appliance repair business. Mainly because many of the “old timers” in the industry had retired rather than trying to learn an almost completely different skillset repairing modern, much more tech driven, appliances. The industry needed/needs younger more tech savvy repair people.

Repairing appliances has quickly become a more tech driven ordeal and the automobile industry is starting to steer in that direction. Allow me to share two incidents in my past make that a great case for our industry to move into EV repair. The first happened by chance while the second was founded out of my own stubbornness to take no for an answer.

While getting coffee at church a bumped into an old friend who shared a story with me about taking his older BMW to the dealership and getting a $5,000 quote to make repairs to his entertainment system that had stopped working. They told him they needed to order a new “motherboard” to complete the repair. He thought it might be time to just buy a new car. I asked him if we could take a look at it in my shop – I had an awesome board repair guy working for me at the time. Long story short. We fixed the board for under $100 bucks, saving him $4,900.

A year later one of our family vehicles failed state inspection because of some issues with the electronic display. My trusted mechanic quoted $2-3K for the repair. It seemed like a simple fix to me so I asked why he couldn’t fix what seemed to be a basic electronic repair and he told me no one in the industry really messes with the electronics they just swap them out. I found an electronic repair guy in NC that specialized in fixing this type of issue. We pulled the console, shipped it, they fixed it, shipped it back, and in less than a week my vehicle passed inspection for only a couple of hundred dollars. He had never heard of this shop. Imagine how much more business is out there.

Friends, there’s gold in them thar hills! Are you ready to keep digging?

These issues highlight the type of work we’re doing for you at the Tech Care Association. We’re working hard everyday to advocate for you and your business to try and keep big tech companies open for business for our industry while we work to bring you new opportunities to expand what you do. This industry is only getting started. Please think about membership today. 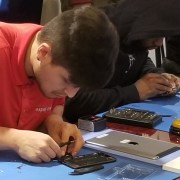 Tech Repair People Are Amazing – All Tech Can/Should Be Fixed

Want to join the discussion?
Feel free to contribute!