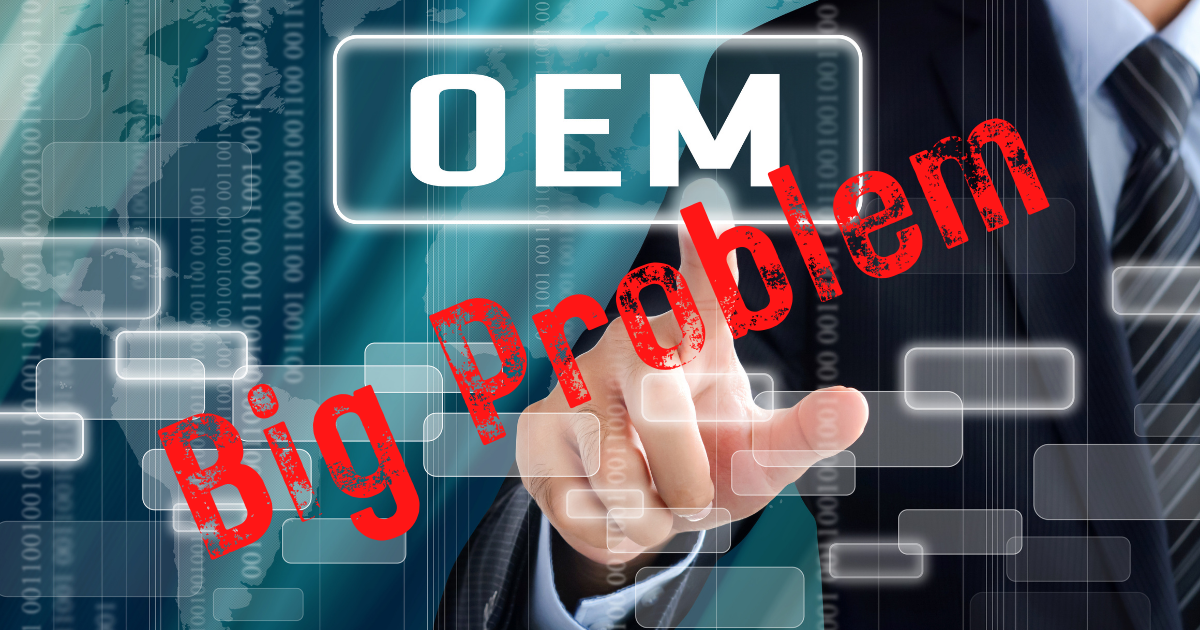 DO YOU HAVE OEM PARTS?

There’s been a dirty little secret in the tech repair industry ever since the industry started. OEM PARTS.

Let me make this clear. Outside of those authorized by Apple (or another OEM) NO ONE HAS OEM PARTS!

Even if you’re one of the honest people out there (and there are a lot of you!) the claim impacts your business because when your competitor says it you find yourself in a bad spot. You can try to maintain your integrity and hope you don’t lose the business, argue with the customer by telling them the other guy is lying, or bend to the pressure and say yours are OEM too. In the end you simply hope the customer doesn’t know or see the difference.

Either way the interaction damages the industry as a whole by putting questions in the customer’s head.

NOW APPLE HAS ADDRESSED THE ISSUE IN TWO MAJOR WAYS

The problem has become so big that Apple is the first company (others will follow) that will now include a software verification system that will clearly show the customer if they have an OEM part or an “Unknown Part” in their device. If you don’t think this will have a major impact on the repair industry, then think again.

As iOS 15.2 rolls out, Apple is adding a new “Parts and Service History” section in the settings app. A feature that will allow anyone who looks at the phone to know if a part has been replaced on the device. If it has, each part replaced will show up in the history followed by either “Genuine Apple Part” or “Unknown Part”. The Genuine Apple Part message will only appear if Apple software is used to sync the parts – a part pulled from another device will appear as “Unknown”

In some ways this will be a really good thing with customers now able to see if the parts in their device or one they might be thinking about buying has been repaired and what kind of parts were used. This will also add another layer to device buyback and/or trade-ins. Some good, some bad for the greater tech care industry.

The second way Apple is addressing this problem is the soon to launch Apple Self Service Repair Program that will put OEM parts directly into the hands of the customer. A program that has been discussed a lot and many are wrongly dismissing as a non-factor for independent repair. You can read additional thoughts on this subject on the WiGoMan blog.

Flying under the radar a bit, Apple also announced recently that they will be doing mobile repair work for small businesses.

A MAJOR CHALLENGE FOR REPAIR SHOPS

I can promise you that Apple and its partners have a plan and they are concisely executing that plan. Each of the things listed above will take away business from the industry. We need to turn the tide!

Listen, getting repair business in the past has been easy for most. You really didn’t have to do much to get some customers. Because of that a lot of people got into the industry. Opportunists that saw the potential and seized it. Think about it. A lot of those people are now getting into crypto, vaping, CBD, etc. Tech repair was a wide open market. But now it’s not. Now it’s going to require more work on your part. It’s going to require you to be more savvy as a business person if you want to stay in business. It’s going to require giving up some control and collaborating with others. It’s going to require a vibrant independent trade association.

HOPE FOR THE FUTURE OF INDEPENDENT REPAIR

People within the industry often site automotive repair as an example of how OEM and aftermarket can coexist. They then try to overlay that example with the tech repair industry. While I often use this example myself there are a few major reasons why it doesn’t work in exactly the same way.

Besides the fact that the automotive repair industry has been around a lot longer and is a much larger industry it has two distinct benefits that are lacking in the tech repair industry. Exposure/branding and industry representation.

Let me explain. The auto repair industry benefits from a lot of brand exposure. If you were to ask someone to name an auto repair business, they could easily. Ask them to name some brand name aftermarket parts and most could do that too. In terms of industry representation there are numerous trade associations that represent the myriad of players in the auto care industry. The biggest of which is the Auto Care Association, a powerful group that helped lobby for the original right to repair legislation and spends a lot of time and money on promoting the industry to the public.

The tech repair industry has none of those things. The only recognizable brand to the public is iFixit followed far behind by Batteries Plus, UBIF, and CPR. Surveys have shown that the average person on the street can’t even name one of these brands, even when they live and work nearby. Ask them to name a parts brand and – sorry to tell you this guys – but you get crickets.

I’ve said it many times in the past, people just don’t know the tech repair industry exists. An active trade association can change that dynamic!

What’s the potential for working together with a neutral non-profit trade association?

I’ve used this example before but think about how other industries responded to challenges to their revenue models. Two of the biggest industry campaigns ever were “Beef, it’s what for dinner” and the “Got Milk” campaigns that were hugely successful in countering the negative consumer culture that had risen at the time. Both of these campaigns were a product of industry trade associations and both of these campaigns produced amazing results for their industries. But they didn’t do it alone. They worked together as an industry to make their industries bigger and better to benefit everyone large and small. How about you?

HOW DOES THE TECH CARE INDUSTRY SURVIVE?

First a question: Do you want a divided race to the bottom or a united climb to the top?

Races are often run alone while climbing tall mountains requires working with others. If you want a divided race to the bottom, then keep doing what you’re doing. If you want to climb to the top of our potential, then let’s work together! Unity can be achieved without conformity.

The fact of the matter is that Apple owns the pie we’re all trying to get a piece of. The tech repair industry has been fighting over a small slice of it for too long, in essence hoping that Apple will give out more slices. The Tech Care Association believes that we can increase the size of the pie (Yes, the whole pie, not just our slice), thus making our slice bigger, by making more people aware of repair and the benefits of working with independent repair. Apple doesn’t want to promote repair because it tarnishes their brand. So we have to, which in turn takes the industry to higher ground instead of fighting each other in a race to the bottom.

Don’t be naïve and think that the recent moves by Apple will not have a major impact on your business. They will. Maybe not at first, but like the tide coming in on a sandcastle, slowly and surely, what you have worked hard to build will be washed out to sea. Everyone will feel the impact from shops to depots to distributors and marketers. You can’t hold the tide back by yourself – no one can!

By working together, a united tech repair industry can turn the tide and increase the size of the pie.

Working together we can promote the quality and value of 3rd party parts or as Apple likes to call them “Unknown Parts”. We can raise brand awareness for the many high quality repair parts that are already in the market. We can help customers understand that a repair with a 3rd party part is a great value for them and make efforts to set standards for parts that will have greater value in the resale market.

Now, more than ever, people need to be better aware of what the independent tech repair industry is all about. We can climb this mountain together or we watch the tide come in alone. The choice is yours.

Help us to help you and change the narrative about the independent tech repair industry by joining the TECH CARE ASSOCIATION and working together. Join us today!